This is a studio of architects, planners and designers, composed of Gian Luigi Banfi (Milan, 1910 - Mauthausen 1945), Ludovico Barbiato di Belgiojoso (Milan 1909), Enrico Peressutti (Pinzano al Tagliamento , Udine, 1908 - Milan 1976) and Ernesto Nathan Rogers (Trieste 1909 - Gardone, Brescia, 1969). Set up in Milan in 1932, it soon became a vivid part of the modern movement, of which the studio is one of the Italian leaders. The first project of note was 1946, after the war and the loss of Banfi: the planning of the reconstruction of Milan, the A.R.plan. At the Ninth Milan Triennale, when one can trace the birth of Italian design (1951), they organised the exhibition “The shape of usefulness” (with Francesco Buzzi Ceriani and Max Hubert). In the area of design, apart from chairs for Arflex, now in production again, they have produced very innovative office furnishings “Space” for Olivetti, the silver teapot service for Calderoni and the Emma handle for Olivari. 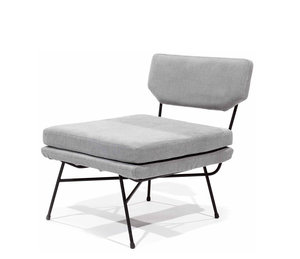